It made me want to become a better book reporter -- sort of.

Well, it made me want to be more responsible about quoting from what I read, instead of always returning the book to the library or leaving it at work and then banging something out later based on my half-drunk recollections. Well, unfortunately I am tired from three hours at the gym tonight, and I am not going to write a competent review of this book. But I AM going to quote Amis, and then sit here and freak out.

He's at his best when he's hanging off the side of the platform, acting goofy and obnoxious and showing off his mad skillz; the more straightforward and admiring pieces in here were predictably more dull, and I enjoyed the Michael Crichton end of the spectrum far more than his paeans to Nabokov. Amis's own high style often shines brightest while he's reviewing the mass-market books that most people actually read.

He writes that the author of Silence of the Lambs , Thomas Harris, "has done what all popular writers hope to do: he has created a parallel world, a terrible antiterra, airless and arcane but internally coherent.

There is just something about the choice of words there and their arrangement which makes me fall into a paralytic swoon. It's not really that Amis makes me want to be a better reviewer -- note I'm typing a long, rambly, unreadable response to his work here that no one sane would ever be expected to get through -- but more accurately that he makes me want to become a better reader. Amis is a great reader, and that's why this is a joy. The guy fucking loves to read, and he's great at it, and his response to literature is itself art, perhaps better art than his actual art the novels , which maybe sucks for him.

Reading this made me briefly ponder questions that I know lots of other people have already spent too much time asking, questions like, "What exactly is the difference between book reviews and criticism? I have no clue and zero interest in trying to field that one. What this book made me wonder about instead was: "What we are to do with it? Let's say we know it when we see it, we know what we like, etc. Once we've got our grubby mitts on some, what then do we do with it? One of the reasons these perhaps cliched questions feel new to me is that I haven't historically found them interesting.

Despite their being the sole arena in my life where I ever performed well, I hated English classes. Okay, I did like writing those papers, but only because it was easy and often felt satisfying in the same way as the crossword puzzle, but I didn't believe in it: excavating symbols and themes, arguing some esoteric claim about an underlying secret message purportedly buried in a canonized text That was bullshit, a parlor trick, that could be fun or annoying.

Most literary criticism and a lot of English majors frustrated me because I didn't understand why they were taking it all so seriously. Why build up these complex theories and earnestly strain yourself trying to interpret a work of fiction, when there is so much in the real world demanding more practical exegesis? It seemed dumb. It seemed superfluous. I really didn't get it. Yeah, it could be entertaining, but it was an activity unlike books themselves that was essentially without any real meaning or importance.

And that's why this website, for a long time, was like hard drugs for me. I've always loved to read but there was never anything to do with it: once I'd finished a book, my work there was done. The things I knew people did -- endless dissertations on that strangely neglected topic; book club musings about which plucky character we identified with the best -- were repellent. But the Goodreads book report was, for a time, the perfect form for me. I loved book reporting, reading other people's book reports, freaking out about books on threads with nerdy strangers with whom I shared this woozy passion Amis mocks it above, but it was the affective and personalized quality of the Goodreads book report that I loved the most.

I'd review a book to let people know if I recommended it or not, but the more important thing was its purely subjective aspect: this book made me cry, this one reminded me of an annoying ex-coworker who suddenly died I read this book during a sixteen-hour layover in the Istanbul airport, while suffering from a dose of the clap For a few years the Goodreads book report felt so important and true to me.

I know that this site made me a better reader; I hope it made me a better writer, though sometimes I wonder if the opposite is true Okay, there's a digression Nothing gold can stay, Ponyboy, and I've grown pretty tired of them by now. So it was nice to read some stuff for once by a professional, no offense guys, but, like, no one on here's written this , from a review of Who's Who in Twentieth Century Literature : Quotations so exotic that you can't imagine anyone human holding them are frequently made to sound banal and secondhand by the World-weary Seymour-Smith.

Well, if it is fashionable, I shall start dismissing Dario's poetry at once, while naturally acknowledging his enormous influence. How, you wonder, can Seymour-Smith keep in touch with so many cultures? Do people ring him up from time to time and say, 'Someone else has learnt to read and write down here? See but, okay, and now here's the thing: if you are involved in some sort of study testing the effects of a safer alternative to Ritalin and Adderall and have therefore made it this far through my rambling boringness, chances are good that the above quotation didn't make you shriek so loud you woke the neighbors and then sink limply down in your seat with an idiot smile playing upon your tired lips.

The biggest surprise lesson this website held for me was that taste remains shockingly subjective, and honestly that's what I don't quite get about all the book reviewing or criticism or whatever it is. Trying to assign the little book report star ratings has always been hard but recently has become so agonizing that I might have to stop doing it. I've always had a very firm rule that my stars are nakedly subjective and based on how my I personally enjoyed a book and not how "good" I think it is. No, it just means that I'm a semi-literate troglodyte.

Maybe the point is that society must maintain a stable of professional-class book reviewers who are not semi-literate troglodytes and who thus can competently evaluate the merits of various works of literature.

But reading just seems like such a wildly intimate and personal experience, and I'm still confused about how reviews and criticism deal with that. Because my own answer to the question of what it is that we are to do with literature is: "Read it. Cry about it.

Laugh at it. And then? He engages with the books and with authors and with their subject: the world. He responds. 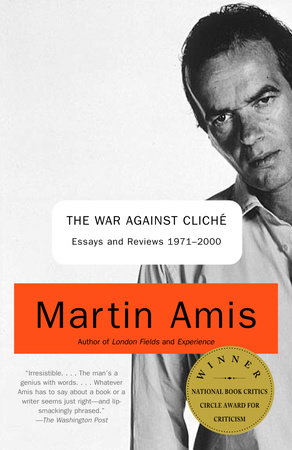 He ties it to other things. He makes something great out of it. Gore Vidal "gives the impression of believing that the entire heterosexual edifice -- registry offices, Romeo and Juliet , the disposable diaper -- is just a sorry story of self-hypnosis and mass hysteria"; Lee Harvey Oswald "made only one notch on the calendar.

It was meaningless; he just renamed an airport, violently. I love picturing Amis as a general enlisting hapless burnouts like myself and turning us into fierce Berserker-style warriors, taking on reading and writing as a martial -- a violent -- activity. In closing, I just realized something about Martin Amis which maybe explains why it's been so hard for me to describe my response to him without resorting to stretched and worn-out sexual cliche: In addition to being hilarious, Martin Amis makes reading and writing seem cool. He makes it high-stakes and thrilling, and not a little fucked-up.

I love him and I'd definitely join his military. I'm sure he wouldn't have me, unless of course The War Against Cliche winds up dragging on a lot longer than he'd initially hoped, and he exhausts all the fit volunteers and is forced to lower his standards for enlistment. Okay, off to bed with a gorgeous picture in my mind of Martin Amis screaming at me through basic training, forcing me to do pushups and teaching me to fire a submachine gun.

May 31, Szplug rated it really liked it. Lately, I've got criticism on my mind.

Although I've been a lifelong consumer of reviews, in especial those of the projected screen and the written page—indeed, a quick estimate would have to place the ratio of content of which I've partaken solely of the review and not the material under discussion movies loom large here in the neighborhood of ten-to-one—I've tended to avoid collections featuring critiques of the same, perhaps of a part with my anxiety over becoming lost—and, hence, burning through Lately, I've got criticism on my mind.

Although I've been a lifelong consumer of reviews, in especial those of the projected screen and the written page—indeed, a quick estimate would have to place the ratio of content of which I've partaken solely of the review and not the material under discussion movies loom large here in the neighborhood of ten-to-one—I've tended to avoid collections featuring critiques of the same, perhaps of a part with my anxiety over becoming lost—and, hence, burning through those precious reserves of time available for primary material ingestion—in reading about books and movies when I could simply dispense with the middle-man and dive straight into the source.

Do as I say? That's not what I do is a life's mantra in my book—not to mention That wasn't my girlfriend, it was my meatloaf. I like the way Amis writes: even when I can feel him straining towards the limits of his capabilities, ever-daring unto those stratospheric heights of which his paradigmatic peer Nabokov ascended with alacrity, his ambitions nonetheless fail in their revelation to prove detrimental to his prose.

The War Against Cliche

He has managed to incorporate it within his elegantly street-smart style and make it work. The word that comes to mind for this collection is solid —and there's nothing at all wrong with consistency if you're not quite kitted out for being an apex predator amongst the literati. Unsurprisingly, I most relished his stiletto maneuvers against texts which I had previously read and not been bound to by any ties beyond simple completion—Mailer's Tough Guys Don't Dance being a prime example, and wherein Amis quickly and astutely nails what were the essential problems I had with it: Still, Mailer may be capable of mischief, flippancy and haste, but he is not capable of broad comic design.